What is Congestive Heart Failure (CHF)?
How common is CHF
How serious is CHF
What are the causes of CHF?
What are the symptoms or complaints of CHF?
How does the body respond to CHF?
What is Diastolic heart failure?
How is CHF diagnosed?
How is CHF treated?

What is Congestive Heart Failure or CHF? The body is made up of living cells that require a constant supply of oxygen and nutrients in order to survive and remain functional. This "fuel" (oxygen and nutrients) is delivered to the body cells in the form of blood that is pumped by the heart. If the heart muscle weakens, the amount of blood pumped is proportionately reduced. Heart failure occurs when the heart is unable to pump enough blood to meet the usual demands of the body.

The circulation of blood within the body is carried out within a closed circuit. In other words, all the blood that is pumped to the body is returned to the heart. 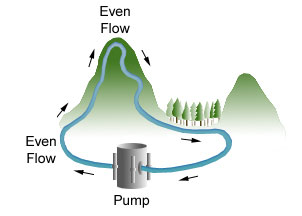 Imagine a pumping water station that sends a constant river-like stream through fields and valleys that have no other source of life-sustaining water. The river runs a circular course up a hill and then back to the pump station (as shown above).

Now imagine that the pump has started to weaken and is unable to efficiently pump water uphill. What would happen? As the water supply to the fields is reduced, the plants start to wither away and turn brown. Also, as less water is pumped forward, the level of water behind the pump begins to rise as the pump cannot keep up with the return. This is comparable to the water level rising behind a dam and flooding fields and valleys that lie behind it. 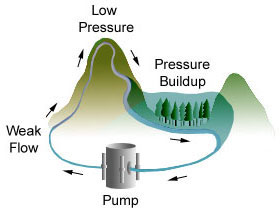 Similar to the example above, the rising back pressure of blood in a failing or weakened heart is faced by all parts (liver, lungs, legs, etc.) of the body that empty into the pump. These organs get congested or "flooded" with fluid as a result of the back pressure. The congestion of the body due to back pressure from a failing heart is known as congestive heart failure or CHF.
The reduced forward flow of the pump directly impacts on all areas that it supplies blood to. For example, fatigue will occur if the muscles in the arms and legs get a reduced supply of oxygen and nutrients (carried by blood).

How common is CHF? Heart failure is a common condition that affects more than 4.5 million people in the USA, with nearly half a million new cases being diagnosed each year.

How serious is CHF? Each year, approximately a quarter of a million people die from heart failure.