A Chest x-ray is obtained either in a physician's office or in the hospital. To obtain a standard PA or postero-anterior view (it is called postero-anterior because the x-ray beam comes from the posterior or back and moves through the chest to the anterior or front). The patient is positioned so that his or her chest touches the container of the x-ray film. The x-ray machine sends a beam from the back and records an image on the film, as shown below. Frequently, a "lateral" film is obtained by having the patient stand sideways in front of the film. This allows the physician to examine the chest from the side. This may help pickup, confirm, or rule out an abnormality suspected in the other view.

A Chest x-ray is very valuable in answering the following questions:

Is the heart enlarged or normal? Are there signs of heart failure and fluid overload? Does the patient have pneumonia or a collapsed lung? Is there evidence of emphysema? Are there findings of an aneurysm involving the aorta (the major blood vessel that arises from the heart and supplies oxygenated blood to the body)? Is there fluid in the sac that surrounds the lung? Is there free air under the diaphragm (the partition that separates the chest from the abdomen) to suggest a hole in the bowel wall? Is there a tumor in the lung that could represent cancer? Are there changes of bronchitis or emphysema. 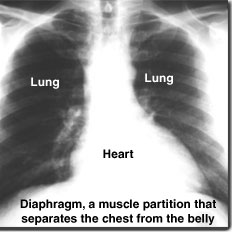 Thus, one can easily see the cost-effectiveness of this relatively simple test. In patient's with lung or heart disease, chest x-rays obtained at yearly, or longer, intervals may provide information about the progression, stability or improvement of disease.
Shown below is a panoramic view of a patient getting a chest x-ray

. You may place your mouse cursor within the panoramic picture and pan left or right.